We’ll see you on the dance floor. 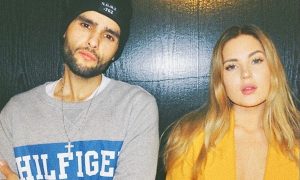 This sexy song makes you dream about summer, late night parties, groovy music and beautiful people. Inspired by Michael Jackson, Daft Punk and Bruno Mars, Dance With U is the result of a collaboration between A-Lee and Ima Sobé. Here it is:

A-Lee is a multi-gold and platinum selling artist, who has released numerous hits since the release of his debut album Missing in 2010. This popular rapper, singer and songwriter has performed more than 300 concerts, including as support for Tinie Tempah, 50 Cent, Snoop Dogg, Nas, Busta Rhymes, The Game and more.

A-Lee is currently doing some changes in his career. When I met him in Oslo last summer, he told me about his rebirth as an artist.   Our conversation made me curious about his plans. I’m trying to figure them out, but that’s a good thing. With his considerable talent for entertaining his fans, there will always be room for A-Lee on the Norwegian music scene.

Ima Sobè is known for being the voice on many popular songs by artists like Tungevaag and Cir.Cuz. The songs have streamed over 35 million times on Spotify and Youtube. Last year, she released her first single Na Na Na. Could it be the start of a promising solo career? Yes, I concluded in in May, 2017. Ima Sobé; already a winner.
Even though it’s winter, several artists are ready for summer. Earlier this month, American crooner Teasley dropped an infectious dance track called Way Back.
But today, the sun is Norwegian. A-Lee and Ima Sobé; please work together again.